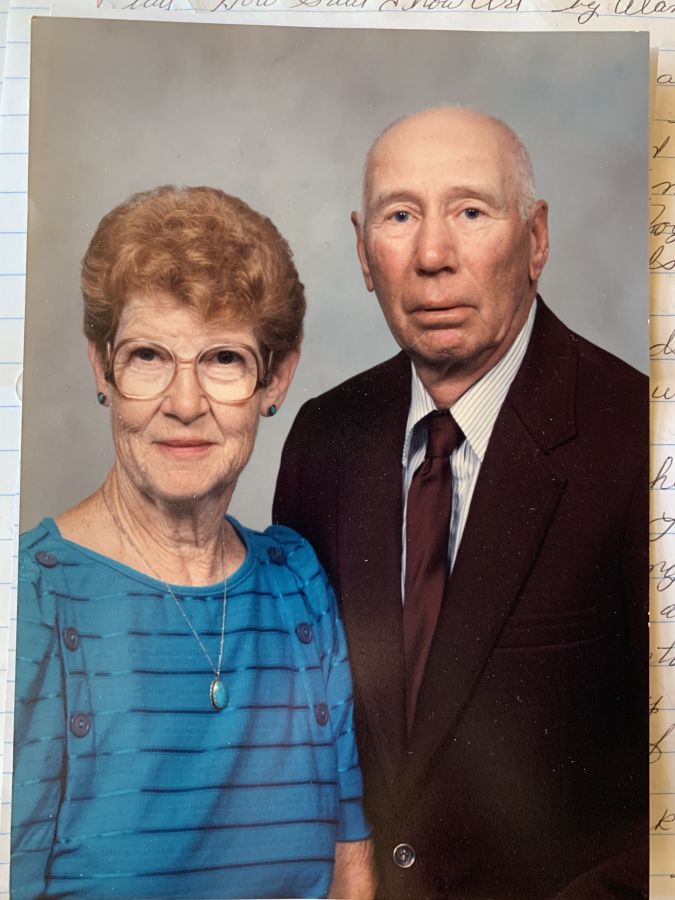 A Graveside Memorial Service was held Saturday, August 3, 2019 at Lone Tree Cemetery in Everly for Edward and Joyce Iseminger. "Together Forever"

Edward "Ed" Iseminger was born April 3, 1916 at Pettibone, ND, the son of Clarence and Lulu (Snell) Iseminger. The family moved to Iowa in 1919. Ed attended school in Estherville, Iowa. After his education, Ed moved to Plover, Iowa where he worked as a farm hand. In 1942, Ed enlisted into the United States Navy, serving over three years aboard the USS Markab in the Asiatic Pacific.

After his service, he returned to farm several years in Minnesota. In the 1950's, he went to work at the Fort Dodge Creamery where he met and later married Joyce (Jacobs) Derrig. He took on the role of dad to her two daughters: Donna and Patricia. In 1961, the family moved to a farm east of Spencer, and two years later, their daughter, Jodie was born.

Ed retired in 1981, and they moved to the Lakes area. They enjoyed 22 years of being "snowbirds" in the winter, and to be near family, they moved back to Spencer in 2007.

He was preceded in death by his parents; a sister, Edith Stowell; two brothers: Melvin and Adrian Iseminger and a nephew, Rick Bendixen.

Joyce was born on April 24, 1929, the daughter of Charles and Goldie Jacobs. The family lived in Rossie, but moved to Hastings, Nebraska where she graduated in 1946. Joyce continued her education by going to Western Union School. When she finished her education, Joyce moved to Fort Dodge, Iowa. She worked as a bookeeper and a waitress at Royal 400 as she raised her two daughters: Donna and Patricia from her first marriage. After that, she started working for Rosedale Creamery where she met and later married Edward Iseminger. In 1961, the family moved to a farm east of Spencer. In 1963, their daughter Jodie was born.

Ed and Joyce retired in 1981 and moved to the Lakes area. They spent 22 years traveling south in the winter. They moved to Spencer in 2007.

Left to mourn Joyce's loss, but to cherish her memory are her three daughters: Donna and Patricia Derrig and Jodie Iseminger all of Spencer, IA; four grandchildren: Nancy Smith (Sherwood) of Kansas, Robert Seymour (Ronda) of Royal, Melinda Newbiggin (Michell) of Texas, and Zachary Iseminger (Kristin) of Spencer; six great-grandchildren and several nieces and nephews as well as many friends.

Joyce was preceded in death by her parents; two infant brothers; a sister; her loving husband of 50 years and her grandson, Michael Seymour.

Posting as Who are you posting as?

There are no tributes yet.

We encourage you to show your support by adding a tribute above:

Let the family know who you are using one of the quick sign-in options below.

Just for verification: we never spam!

The attached photos are added to the memorial of Joyce & Edward Iseminger to help share their legacy.

Add to Your Calendar

We will notify you soon.

You will receive an e-mail daily when a guest leaves a tribute on this obituary.

Thank you for sharing your memory of

Help show your support by providing a gift of flowers and spreading the word.

Help friends and acquaintances of leave memories by sharing to Facebook