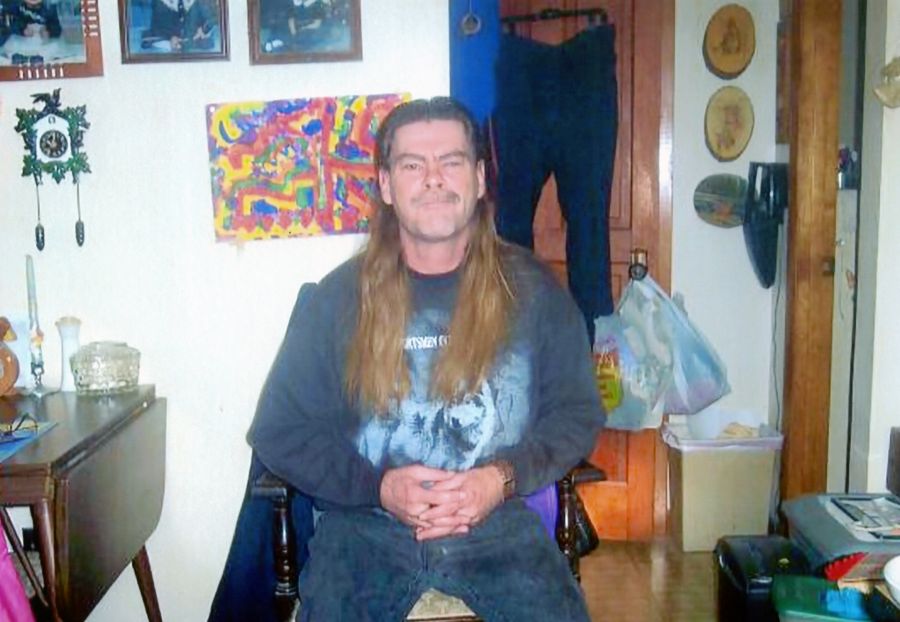 Let me tell you a story... Every word is true, except those that aren't. It's about a one-eyed hippie type looking fellow all dressed in black named Darrell Frederick Morgan.

Darrell, son of Benjamin and Barbara (Pickover) Morgan was born 06/13/1958 at 6:13 a.m. in Albuquerque, NM on the Mixed Nation Reservation. He attended Clear Water High School, and he also attended college in Ohio.

He was a jack of all trades, but master of none. One of his favorite things was magic as a hobby and profession. Rags the magician loved to do magic for anyone. He loved doing stuff with and for his children - they came first - making pancake shapes, coaching, girl scouts, biking, camping, fishing and flying kites. He also liked to shoot pool and throw darts - he could do it better than most people with two eyes. Volunteering was something else he often did - helping at Upper Des Moines, painting, moving furniture, unloading trucks and helping to build the playground at Harrison Park. He won an outstanding volunteer award for Palo Alto County in 2009.

In his younger years, he was a firefighter. He also enjoyed helping some elderly ladies get to the places they needed to be. He never met a stranger, and he would give you the shirt off his back if you needed it. Among his many hobbies was storytelling - he told many great stories to his kids and others. He loved counseling others to help them find their right path. Being a Shaman and helping people with their spiritual encounters was among his many passions. He liked to garage sale and auction and loved to dicker people down on their prices. He loved to ride motorcycles and even after he could no longer ride, he still loved the sound and talking to people about their bikes. Animals loved him and he had many furry friends over the years. One of his favorite four-legged friends was his white wolf, Roscoe P. Coltrain. His current helpers were his dog, Spot-bob and cats, Luna and Paws. One of his many funny quotes was Jack, is my friend even though he no longer drank.

Family and friends meant everything to him. He was a great husband, father, grandfather and friend and will be greatly missed by all.

On July 8, 2019, Darrell passed away at the Palo Alto County Hospital in Emmetsburg after a long battle with COPD.

He was preceded in death by his parents.

Posting as Who are you posting as?

So very sorry to hear about Darrell's passing! He was a friend from FB and from other sites before. I was thankful ethat Darrell found Jesus and loved to post about his Lord and Savior. Prayers for comfort and peace for the coming days! Am certain Darrell is sending down hugs and kisses to family friends from Heaven! Angie

I didn't know you...but remember Niyah from Colton's funeral. I am his Aunt Mary
I am so sorry for your loss!
Reading his obituary...he sounded like a great man. Sorry we didn't meet. I'm sure I would have liked him.
I imagine Colton is greeting him in heaven!

Our deepest sympathies in the loss of Darrell. He was a great man & did so much for so many. We will miss our talks with him. You will all be in our thoughts and prayers. Mike & Mary

Carla Niyah and family
You all are in my thoughts and prayers.
My God wrap his loving arms around you all at this difficult time

Darrel, you were a really good friend. I enjoyed spending time with you - talking and laughing. Thanks for 17 years of friendship. Ted Klein

Darrell was such a kind and gentle soul. He always had a smile and a hug for everyone. He will be missed by many. Our deepest condolences Carla, Niyah, & family.

Oh Carla, my heart is breaking for you & Niyah. So sorry to hear this.

Carla my heart aches for you! I am so sorry for your loss

Carla and Niyah you will always feel his love. My condolences. A kinder man could not be found.

Carla, Niyah, and family my thoughts and prayers are with you. Darrell was a very wise and spiritual man and one of the most interesting people I ever met. I will miss his posts on fb.

Carla, Paul and I are so very sorry to hear of Darrell's passing! Am sure that you have a lot of wonderful memories together! Our hearts and prayers go out to your whole family! With much love, Paul & LeAnn Maahs

The services for Darrell have not yet been added. Please sign up below to be notified when the services are ready.

Get Notified When a Service is Added

Let the family know who you are using one of the quick sign-in options below.

Just for verification: we never spam!

The attached photos are added to the memorial of Darrell Frederick Morgan to help share their legacy.

Add to Your Calendar

We will notify you soon.

You will receive an e-mail daily when a guest leaves a tribute on this obituary.

You will receive a notification text whenever there's an update to this obituary.

Thank you for sharing your memory of Darrell

Help show your support by providing a gift of flowers and spreading the word.